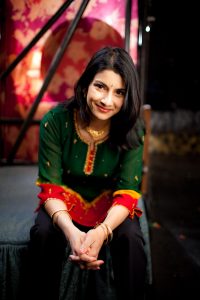 Anjalee Deshpande Hutchinson is a director, deviser and educator who teaches at Bucknell University. Anjalee, a graduate of the MFA directing program at Northwestern University, studied under Robert Falls of the Goodman Theatre. Before and after graduate school, Ms. Deshpande freelanced as an actor /director in New York City, Chicago, London and Mumbai. Of her acting roles, her favorites remain the 1997 film; Once We Were Strangers which competed at the 1998 Sundance Film Festival; and the 1998 CBN television special The Prodigal Daughter which aired in India on D-TV. Previous to Bucknell University, Anjalee enjoyed both teaching and directing at Le Moyne College in Syracuse NY as well as at her undergraduate alma mater, Kalamazoo College. Select directing credits include: Harvest by Manjula Padmanabhan at The University of Pittsburgh, The Bacchae based on the play by Euripides and rewritten by Bucknell University students, Balm In Gilead by Lanford Wilson, Translations by Brian Friel, Arcadia by Tom Stoppard, Anton Chekov’s The Seagull and Blood Wedding by Federico Garcia Lorca in a new translation by Caridad Svich. Anjalee has trained in Moment Work through Andy Paris of The Tectonic Theatre Project, is an accredited teacher of the Chekhov Technique through The National Michael Chekhov Association and is also a member of MICHA: the internationally renown Michael Chekhov Association. Anjalee is also is an accredited teacher of the Sanford Meisner Technique through the True Acting Institute.  Anjalee’s book Acting Exercises for Non-Traditional Performance: Michael Chekhov Reimagined is available through Routledge Publishing. Anjalee’s second book; an edited collection of essays; Michael Chekhov and Sanford Meisner; Collisions and Convergence in Actor Training, is due out Spring 2020 also through Routledge Publishing.