Chekhov TechniqueThe strength of the Michael Chekhov technique is the method’s approach to character study and play analysis which stresses strong connections between physicality, intellect and imagination. This method seeks to develop characters kinesthetically and requires collective commitment from the entire ensemble as a whole. Although some of the work is done alone, the most relevant inquiry takes place within group work during the rehearsal process. In directing and acting, I have found this kind of ensemble exploration of text to be both physically and intellectually freeing and an excellent medium for working in particular with undergraduates for whom both risk taking and thinking divergently can sometimes be major obstacles. I am certified to teach Michael Chekhov technique through the National Michael Chekhov Association.

Meisner TechniqueThe strength of the Sanford Meisner method is as a performance technique that offers a tangible way to connect actors onstage in vibrant and visceral ways. The technique centers on authenticity and requires a high degree of actor commitment and courage in order to fully embody a sense of truth in performance. This work is training for the event of performance and offers specific craft on high intensity scene and monologue work. In directing and acting, I have found this work extremely practical and viable in supporting the actor to achieve high caliber onstage moments as well as palpable connections to the other actors onstage. As a director of students and as an educator, I am carefully implementing this into my rehearsal process as well as my classes, offering the students this excellent opportunity for advanced performance work onstage, while still creating an atmosphere of support and alternatives should they feel this work is too difficult or uncomfortable for them to undertake as developing artists. I am certified to teach Sanford Meisner technique through the True Acting Institute. 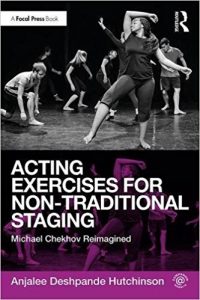 Acting Exercises for Non-Traditional Staging: Michael Chekhov Reimagined offers a new set of exercises for coaching actors when working on productions that are non-traditionally staged in arenas, thrusts, or alleys – but are equally useful in rehearsal or performance on the proscenium stage. All of the exercises are adapted from Michael Chekhov’s acting technique, but are reimagined in new and creative ways that offer innovative twists for the practitioner familiar with Chekhov, and easy accessibility for the practitioner new to Chekhov. These exercises are especially useful for directors looking for new ways to engage performers in character and play analysis that expands on the physical imagination as an entry point to the text. Exploring the methodology through a modern day lens, these exercises are energizing additions to the classroom and essential tools for more a vibrant rehearsal and performance. Link to Book on Amazon 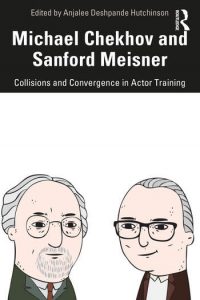 Michael Chekhov and Sanford Meisner: Collisions and Convergence in Actor Training offers a comprehensive analysis of the Sanford Meisner Acting Technique in comparison to the Michael Chekhov Acting Technique. This compilation reveals the connections as well as the contradictions between these two very different approaches, while highlighting meaningful bridges and offering in-depth essays from a variety of sources, including master teachers with years of experience and new and rising stars in the field. The authors provide philosophical arguments on actor training, innovative approaches to methodology, and explorations into integration, as well as practical methods of application for the classroom or rehearsal room, or scaffolded into a curriculum. Michael Chekhov and Sanford Meisner: Collisions and Convergence in Actor Training is an excellent resource for professors teaching Introductory, Intermediate or Advanced Acting Technique as well as acting program directors and department chairs seeking new, impactful research on actor training. Link to Book on Amazon

• Meisner in the Classroom, Chekhov in Rehearsal. Sanford Meisner and Michael Chekhov; Collisions and Convergence in Actor Training. Routledge, NYC. 2020

Other Published Book Chapters and Essays on Acting Technique:

• My Hindu Connection to Michael Chekhov. Player’s Journal; Volume 2. 2008. (Do not click on name in contents, scroll down page to 4th article down.)